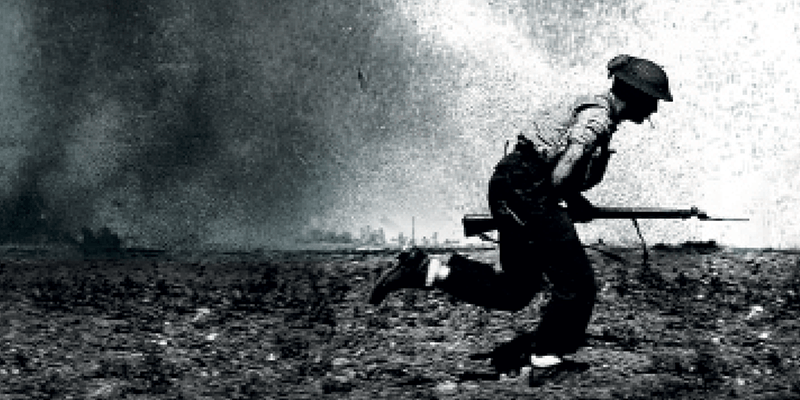 “If there is a contemporary British historian who is the chronicler of World War II, it would be Max Hastings. In book after book, he has zoomed in on individual theaters and arenas in the global conflict, which continues to fascinate historians and readers more than 65 years after it finally came to an end.

If you want to know all about the Battle of Britain or the United Kingdom’s Bomber Command or Winston Churchill’s pivotal role in the war, Hastings’ studies are the ones to go for. If you want a detailed account of the Normandy Invasion, there’s his definitive “Overlord.” How did the Allies finally conquer Germany and Japan? “Armageddon: The Battle for Germany, 1944-1945” and “Retribution: The Battle for Japan, 1944-45” will each give you a detailed account of how these monumental feats were accomplished.

The great virtue of this culminating volume “Inferno” is that it provides the whole six years as only someone as knowledgeable as Hastings can do. No mere recapitulation, not simply a cut-and-paste job drawn from all those previous works. It is a true distillation of everything this historian has learned from a lifetime of scholarship – and more important, of real thought – on what he calls “the greatest and most terrible event in human history.”

“Within the vast compass of the struggle,” he writes, “some individuals scaled summits of courage and nobility, while others plumbed depths of evil, in a fashion that compels the awe of posterity. Among citizens of modern democracies to whom serious hardship and collective peril are unknown, the tribulations that hundreds of millions endured between 1939 and 1945 are almost beyond comprehension. Almost all those who participated, nations and individuals alike, made moral compromises. … Allied victory did not bring universal peace, prosperity, justice or freedom. … All that seems certain is that Allied victory saved the world from a much worse fate that would have followed the triumph of Germany and Japan.”

Hastings wisely refrains from triumphalist history. Instead, he concentrates brilliantly on what can justly be claimed about World War II. While “Inferno” paints an overall view of the strategic and political aspects of the conflict, it devotes a great deal of space to the reactions and overall feelings of men and women – some famous, others not at all. Hastings is determined to show individual experience and to emphasize that it was what made up life, so excruciatingly various, for soldiers and civilians, perpetrators and victims, survivors and sufferers. For all the virtues of the big picture, if it is painted with overly broad strokes, then it can become too impenetrable for true comprehension and appreciation of what it actually felt like to be there, to have to cope. No danger of such blurring in Hastings’ “Inferno.” Individuals and their predicaments leap from its pages, the contrasts, as well as similarities, flashing off one another.

Rationing for the American civilian means steak or perhaps butter is not always available, so that the troops have plenty of both (and more) wherever they are across the globe. For the British at home, it means a few ounces of meat per person – whatever the butcher is handing out – while the troops subsist on bully beef, tea and canned fruit in the heat of the North African desert. Italian troops are so hungry that they are delighted when they capture enemy stores of delicacies like tea, which they have not seen.

But everything here is cumulative, and we are soon transported to the Nazi death camps and Soviet gulag where starvation is an instrument of policy just as much as it was of the Japanese. And, of course, it’s not all about food or the lack of it. There is murder and mayhem aplenty, including rape, genocide, and terrible injuries and deaths inflicted on soldiers and civilians alike.

Back in Hastings’ homeland, this magisterial historical overview of World War II was titled “All Hell Let Loose: The World at War 1939-1945.” Whether under the more elegant, brief name it has in this country or this more expansive one, the emphasis is quite rightly on the infernal qualities of the conflict. Both certainly reflect the text, which pulls no punches in showing the hellish experiences, some even more extreme than others, endured by so many in this global arena of what Winston Churchill so presciently termed “blood, sweat and tears.”