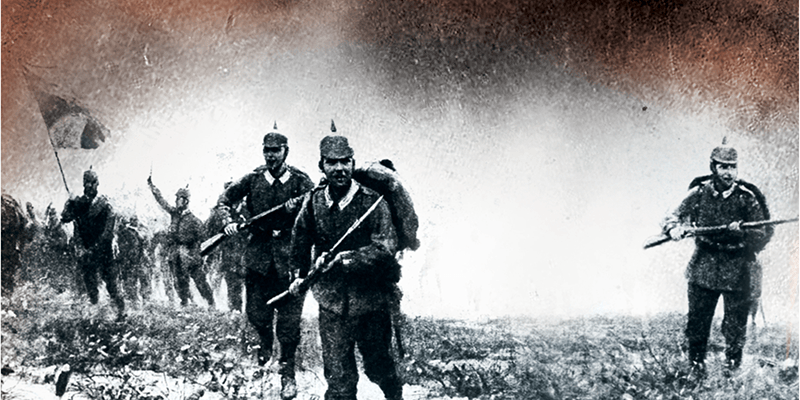 Hailed as ‘excellent’ by Andrew Marr, Max’s new book Catastrophe: Europe Goes to War 1914, published on 12th September, is now in its fifth week in the Sunday Times top ten non-fiction bestsellers.  Among the latest reviewers, Nigel Jones writes in the Sunday Telegraph’s Book Of The Week feature:

‘This is a magnificent and deeply moving book, and with Max Hastings as our guide we are in the hands of a master’.  Hew Strachan in the New York Times writes that Barbara Tuchman’s legendary best-seller The Guns of August ‘has been supplanted’. Max Boot in the New York Times Book Review describes the book as ‘excellent’, concluding ‘Hastings brilliants shows how … World War I came to assume the dispiriting and bloody form it would hold for the next four years’.  America’s Library Journal says Catastrophe represents ‘an ideal into World War I history’.
‘Like one of Field Marshal Haig’s family whiskies, Max Hastings is a dram that steadily improves with age … His position as Britain’s leading military historian is now unassailable … In this enormously impressive new book, Hastings effortlessly masters the complex lead-up to and opening weeks of the First World War … [He] is as magisterial as we would expect … This is a magnificent and deeply moving book, and with Max Hastings as our guide we are in the hands of a master’ Nigel Jones, Telegraph
‘Max Hastings does an excellent job of assembling a chronicle of the war’s first few months … and … skilfully marshals evidence assembled by several generations of scholars into a highly readable narrative that should … be the last word on the subject … CATASTROPHE brilliantly shows how, within its first few months, World War 1 came to assume the dispiriting and bloody form it would hold for the next four years’  The New York Times Book Review
‘Magnificent … Hastings writes with an enviable grasp of pace and balance, as well as an acute eye for human detail. Even for readers who care nothing for the difference between a battalion and a division, his book is at once moving, provocative and utterly engrossing’ Sunday Times
‘Masterly … Hastings is a brilliant guide to that strange, febrile twilight before Europe plunged into darkness. Writing in pungent prose suffused with irony and underpinned by a strong sense of moral outrage, ‘Catastrophe’ is a frontal assault on what Hastings calls the “poets’ view” … This is history-writing at its best, scholarly and fluent … for anyone wanting to understand how that ghastly, much-misunderstood conflict came about, there could be no better place to start than this fine book’ The Times
‘One could scarcely ask for a better guide to these horrors than Max Hastings … he is a superb writer with a rare gift for evoking the rhythm, mood and raw physical terror of battle … Hastings gives vivid portraits of the war at sea, in the air and on the home front … This book is a first-class narrative … If you are looking for a humane and compelling interpretive chronicle of the formative months of this horrific conflict, you will find none better’ Mail on Sunday
‘What [Hastings] does, in the same absorbing style that we enjoyed in All Hell Let Loose, is to explain how the Great Powers got into it, and he does so with commendable clarity … The extent of his research is truly impressive … [This is] a book that is as enjoyable to read as it is important historically … Masterpieces like Catastrophe are critical in helping us to [draw important and fair conclusions]’ Country Life
‘Very readable … his account of the fighting on the eastern front draws on powerful and unfamiliar material … ‘Catastrophe’ is magnificent on the western front … Sir Max has retold it as well as any of his predecessors. Character, pace, sense of landscape, battlefield detail – all are superbly done … it’s a splendid read’ Observer
‘Compelling … one of the great strengths of ‘Catastrophe’ is the space and energy it gives to the less familiar theatres and aspects of the conflict … It is the story of the Germans’ bid for a quick and crushing victory in the west, told with an equal richness of detail and sure narrative drive, that is the core of ‘Catastrophe’, and no story better deserves the name … formidably impressive … Hastings does full justice to its appalling drama … ‘Catastrophe’ is rich in unexplored sources from every side of the conflict and every theatre of the war’ Spectator
‘Vivid and compelling … superbly detailed and nuanced … Hastings is a master of the pen portrait and the quirky fact … yet his greatness as a historian – never shown to better effect than in this excellent book – lies in his willingness to challenge entrenched opinion’ Saul David, Evening Standard
Max is also writing and presenting a documentary on the outbreak of the war to be broadcast on BBC2 in April 2014 and will be a key figure in the centenary events next year. Find out more about Catastrophe from the video on the right.