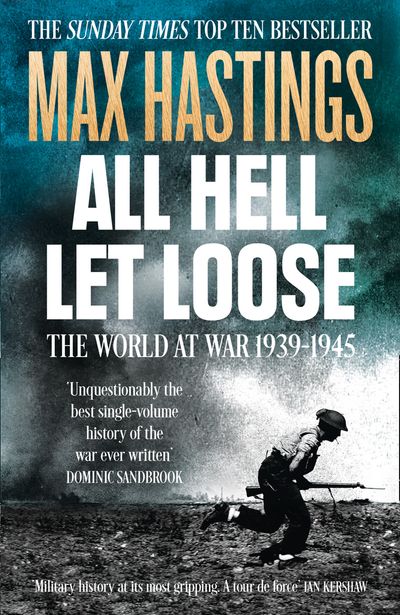 Recommended for viewing on a tablet.

From one of our finest historians, a magisterial account of the most terrible event in history – World War II.

The horror of World War II touched the lives of millions across the globe. Few could find the words to describe it, only that the carnage they experienced resembled ‘all hell let loose’.

The eminent historian Max Hastings here encapsulates life through war for the ordinary people involved –soldiers, sailors and airmen; British housewives and Indian peasants; SS killers and the citizens of Leningrad: Japanese suicide pilots and American carrier crews. This ‘everyman’s story’ employs top-down analysis and bottom-up testimony to reveal the meaning of this vast conflict and ultimately answer the question ‘what was World War II like?’.

Author: Max Hastings
Format: ebook
Release Date: 29/09/2011
ISBN: 978-0-00-733812-2
Max Hastings is the author of twenty-six books, most about conflict, and between 1986 and 2002 served as editor-in-chief of the Daily Telegraph, then editor of the Evening Standard. He has won many prizes both for journalism and his books, of which the most recent are All Hell Let Loose, Catastrophe and The Secret War, best-sellers translated around the world. He is a fellow of the Royal Society of Literature, an Honorary Fellow of King’s College, London and was knighted in 2002. He has two grown-up children, Charlotte and Harry, and lives with his wife Penny in West Berkshire, where they garden enthusiastically.

Recommended for viewing on a tablet.

From one of our finest historians, a magisterial account of the most terrible event in history – World War II.