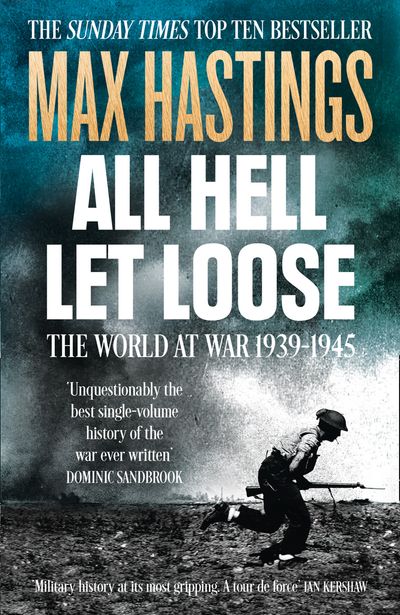 The author emphasises the Russian front, where more than 90% of all German soldiers who perished met their fate. He argues that, while Hitler’s army often fought its battles brilliantly well, the Nazis conducted their war effort with stunning incompetence’. He suggests that the Royal Navy and US Navy were their countries’ outstanding fighting services, while the industrial contribution of the United States was much more important to allied victory than that of the US Army.

The clich is profoundly true’, he says. The world between 1939 and 1945 saw some human beings plumb the depths of baseness, while others scaled the heights of courage and nobility’. This is everyman’s story’, an attempt to answer the question: What was the Second World War like ?’, and also an overview of the big picture. Max Hastings employs the technique which has made many of his previous books best-sellers, combining top-down analysis and bottom-up testimony to explore the meaning of this vast conflict both for its participants and for posterity.

‘This is the book he was born to write: a work of staggering scope and erudition, narrated with supreme fluency and insight, it is unquestionably the best single-volume history of the war ever written’
Sunday Times

On 19 July Max was presented with the Royal United Services Institution 2012 Duke of Westminster's medal for military literature, for All Hell Let Loose. Read More

On Saturday 27 October 2012 at a dinner and ceremony at the Hilton Hotel in Chicago, Max was presented with the annual literary prize of the Pritzker Military Library, accompanied by a cheque for $100,000, for his contribution to military writing.   Read More

Thanks to all my readers in Britain who have so far bought over 250,000 copies of All Hell Let Loose and many more worldwide. Read More

Your feedback for the All Hell Let Loose paperback

All Hell Let Loose is now available to British readers in paperback and I hope many more of you will enjoy it as much as the hardback audience has done.  Read More

"If there is a contemporary British historian who is the chronicler of World War II, it would be Max Hastings. Read More

Profile of Max from The Telegraph

What makes military historian Max Hastings keep on writing about the Second World War? The former Daily Telegraph editor has a voracious capacity for work, rising at 5am and often writing 5,000 words a day. His new book, All Hell Let Loose, runs to 675 pages. By Elizabeth Grice Read More

I have written All Hell Let Loose (published in US as Inferno) with two ideas in mind: first, to try to offer some of my own thoughts about great issues which I haven’t discussed in earlier books, and about which I hope that I may have something new to bring to the party- to complete my personal cycle about the Second World War, if you like. Read More

(Published as INFERNO in the US) From the New York Times: “Inferno: The World at War, 1939-1945” sums up and surpasses all his previous publications: a new, original and necessary history, in many ways the crowning of a life’s work Read More

A magisterial history of the greatest and most terrible event in history, from one of the finest historians of the Second World War. A book which shows the impact of war upon hundreds of millions of people around the world- soldiers, sailors and airmen; housewives, farm workers and children..
Buy Now Read more