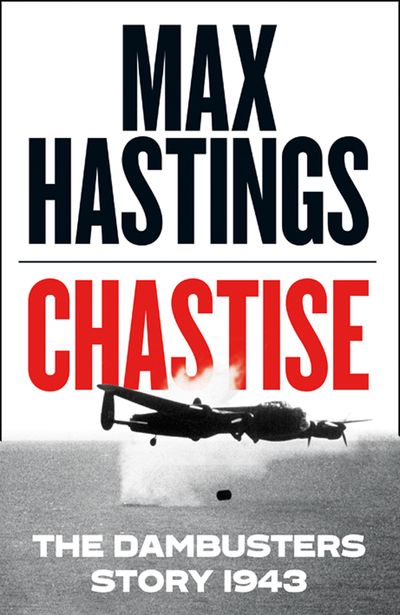 Operation Chastise, the overnight destruction of the Möhne and Eder dams in north-west Germany by the RAF’s 617 Squadron, was an epic that has passed into Britain’s national legend.

Max Hastings grew up embracing the story, the classic 1955 movie and the memory of Guy Gibson, the 24-year-old wing-commander who won the VC leading the raid. In the 21st Century, however, Hastings urges that we should review the Dambusters in much more complex shades. The aircrew’s heroism was wholly authentic, as was the brilliance of Barnes Wallis, who invented the ‘bouncing bombs’. But commanders who promised their young fliers that success could shorten the war fantasised wildly. What Germans call the Möhnekatastrophe imposed on the Nazi war machine temporary disruption, rather than a crippling blow.

Hastings vividly describes the evolution of Wallis’ bomb, and of the squadron which broke the dams at the cost of devastating losses. But he also portrays in harrowing detail those swept away by the torrents. Some 1,400 civilians perished in the biblical floods that swept through the Möhne valley, more than half of them Russian and Polish women, slave labourers under Hitler.

Ironically, Air Marshal Sir Arthur ‘Bomber’ Harris gained much of the credit, though he opposed Chastise as a distraction from his city-burning blitz. He also made what the author describes as the operation’s biggest mistake – the failure to launch a conventional attack on the Nazis’ huge post-raid repair operation, which could have transformed the impact of the dam breaches upon Ruhr industry.

Chastise offers a fascinating retake on legend by a master of the art. Hastings sets the dams raid in the big picture of the bomber offensive and of the Second World War, with moving portraits of the young airmen, so many of whom died; of Barnes Wallis; the monstrous Harris; the tragic Guy Gibson, together with superb narrative of the action of one of the most extraordinary episodes in British history.

Author: Max Hastings
Format: Hardback
Release Date: 05/09/2019
Pages: 464
ISBN: 978-0-00-828052-9
Max Hastings is the author of twenty-six books, most about conflict, and between 1986 and 2002 served as editor-in-chief of the Daily Telegraph, then editor of the Evening Standard. He has won many prizes both for journalism and his books, of which the most recent are All Hell Let Loose, Catastrophe and The Secret War, best-sellers translated around the world. He is a fellow of the Royal Society of Literature, an Honorary Fellow of King’s College, London and was knighted in 2002. He has two grown-up children, Charlotte and Harry, and lives with his wife Penny in West Berkshire, where they garden enthusiastically.

Retailers Read more
We use cookies to personalise content and ads, to provide social media features and to analyse our traffic. We also share information about your use of our site with our social media, advertising and analytics partners. Read More
Cookie settingsACCEPT REJECT
Manage consent
Necessary Always Enabled

These cookies may be set through our site by our advertising partners. They may be used by those companies to build a profile of your interests and show you relevant adverts on other sites. They do not store directly personal information, but are based on uniquely identifying your browser and internet device. If you do not allow these cookies, you will experience less targeted advertising.

Performance cookies are used to understand and analyze the key performance indexes of the website which helps in delivering a better user experience for the visitors.