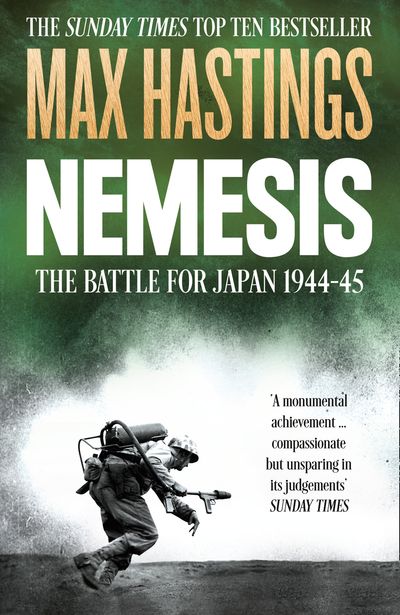 Author: Max Hastings
Format: ebook
Release Date: 17 Sep 2009
Pages: None
ISBN: 978-0-00-734409-3
Detailed Edition: Text Only edition
Max Hastings is the author of twenty-six books, most about conflict, and between 1986 and 2002 served as editor-in-chief of the Daily Telegraph, then editor of the Evening Standard. He has won many prizes both for journalism and his books, of which the most recent are All Hell Let Loose, Catastrophe and The Secret War, best-sellers translated around the world. He is a fellow of the Royal Society of Literature, an Honorary Fellow of King’s College, London and was knighted in 2002. He has two grown-up children, Charlotte and Harry, and lives with his wife Penny in West Berkshire, where they garden enthusiastically.

”'A monumental achievement…Compassionate but unsparing in its judgements.” - Laurence Rees, author of 'The Nazis: A Warning from History’, Sunday Times

”'An outstandingly gripping and authoritative account of the battle for Japan, and a monument to human bravery and savagery.” - Daily Telegraph

”'Magisterial…it is truly cathartic to reach the end of the Second World War in Hastings’s company.” - The Times

”'Brilliantly though Hastings lays out the strategic context, his real talent lies in his account of the 'terrible human experience' that it involved…This is a book for anyone who wants to understand what happened in half the world during one of the bloodiest periods of the blood-soaked 20th century.” - Spectator

”'Spectacular…Hastings makes important points about the war in the East that have been all too rarely heard…excellent…compelling…searingly powerful.” - Sunday Telegraph

”'As Hastings brilliantly describes, conditions for fighting men on both sides were appalling…the fire-bombing of Tokyo and the decision to drop the atomic bombs were influenced by the urge to 'get this business over with', but the argument, as Hastings explains so well with his usual exemplary judgement, is far more complex.” - Financial Times