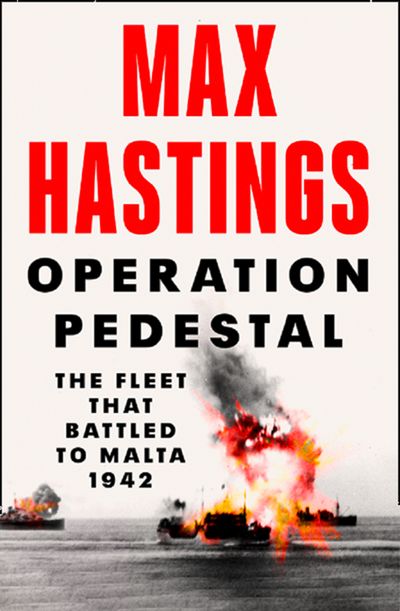 Operation Pedestal: The Fleet that Battled to Malta 1942: Signed edition

In August 1942, beleaguered Malta was within weeks of surrender to the Axis, because its 300,000 people could no longer be fed. Churchill made a personal decision that at all costs, the ‘island fortress’ must be saved. This was not merely a matter of strategy, but of national prestige, when Britain’s fortunes and morale had fallen to their lowest ebb.

The largest fleet the Royal Navy committed to any operation of the western war was assembled to escort fourteen fast merchantmen across a thousand of miles of sea defended by six hundred German and Italian aircraft, together with packs of U-boats and torpedo craft. The Mediterranean battles that ensued between 11 and 15 August were the most brutal of Britain’s war at sea, embracing four aircraft-carriers, two battleships, seven cruisers, scores of destroyers and smaller craft. The losses were appalling: defeat seemed to beckon.
This is the saga Max Hastings unfolds in his first full length narrative of the Royal Navy, which he believes was the most successful of Britain’s wartime services. As always, he blends the ‘big picture’ of statesmen and admirals with human stories of German U-boat men, Italian torpedo-plane crews, Hurricane pilots, destroyer and merchant-ship captains, ordinary but extraordinary seamen.

Operation Pedestal describes catastrophic ship sinkings, including that of the aircraft-carrier Eagle, together with struggles to rescue survivors and salvage stricken ships. Most moving of all is the story of the tanker Ohio, indispensable to Malta’s survival, victim of countless Axis attacks. In the last days of the battle, the ravaged hulk was kept under way only by two destroyers, lashed to her sides. Max Hastings describes this as one of the most extraordinary tales he has ever recounted. Until the very last hours, no participant on either side could tell what would be the outcome of an epic of wartime suspense and courage.

Author: Max Hastings
Format: Hardback
Release Date: 13 May 2021
Pages: 336
ISBN: 978-0-00-847029-6
Detailed Edition: Signed edition
Max Hastings is the author of twenty-seven books, most about conflict, and between 1986 and 2002 served as editor-in-chief of the Daily Telegraph, then editor of the Evening Standard. He has won many prizes both for journalism and his books, of which the most recent are All Hell Let Loose, Catastrophe and The Secret War, best-sellers translated around the world. He is a fellow of the Royal Society of Literature, an Honorary Fellow of King’s College, London and was knighted in 2002. He has two grown-up children, Charlotte and Harry, and lives with his wife Penny in West Berkshire, where they garden enthusiastically.

‘Over this past year of pandemic, we’ve lost so much. People have died, great institutions have gone under, life itself seems permanently altered. Yet one certainty remains: Max Hastings still churns out military histories, and they continue to be outstanding. This book like all the others … is a cracker. With his usual combination of sensitivity to human suffering and superb dramatic instinct, Hastings has given us a gripping tale …The immediacy of this book obliterates the cold detachment that time’s passage usually allows … We feel in our bones torpedoes hitting home … the four-day ordeal British sailors endured … is a drama superbly told …The delight lies in the detail, the percussive power of tiny facts …is what makes Hastings such a superb storyteller’The Times -

‘Superb … as ever Hastings gives excellent pen portraits of the personalities involved … Hastings has written many wonderful books … but few combine so well his unique gifts as a historian: an understanding of human nature, a nose for a telling quotation, and the ability to write gripping prose’Sunday Telegraph -

‘One of the most dramatic forgotten chapters of the war, as told in a new book by the incomparable Max Hastings’Daily Mail -