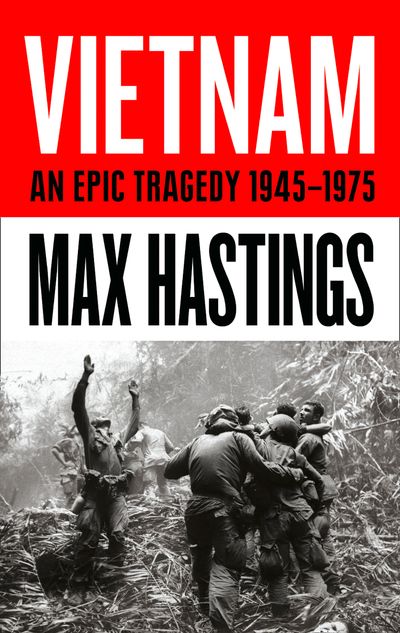 Vietnam became the Western world’s most divisive modern conflict, precipitating a battlefield humiliation for France in 1954, then a vastly greater one for the United States in 1975. Max Hastings has spent the past three years interviewing scores of participants on both sides, as well as researching a multitude of American and Vietnamese documents and memoirs, to create an epic narrative of an epic struggle. He portrays the set pieces of Dienbienphu, the Tet offensive, the air blitz of North Vietnam, and less familiar battles such as the bloodbath at Daido, where a US Marine battalion was almost wiped out, together with extraordinary recollections of Ho Chi Minh’s warriors. Here are the vivid realities of strife amid jungle and paddies that killed 2 million people.

Many writers treat the war as a US tragedy, yet Hastings sees it as overwhelmingly that of the Vietnamese people, of whom forty died for every American. US blunders and atrocities were matched by those committed by their enemies. While all the world has seen the image of a screaming, naked girl seared by napalm, it forgets countless eviscerations, beheadings and murders carried out by the communists. The people of both former Vietnams paid a bitter price for the Northerners’ victory in privation and oppression. Here is testimony from Vietcong guerrillas, Southern paratroopers, Saigon bargirls and Hanoi students alongside that of infantrymen from South Dakota, Marines from North Carolina, Huey pilots from Arkansas.

No past volume has blended a political and military narrative of the entire conflict with heart-stopping personal experiences, in the fashion that Max Hastings’ readers know so well. The author suggests that neither side deserved to win this struggle with so many lessons for the 21st century about the misuse of military might to confront intractable political and cultural challenges. He marshals testimony from warlords and peasants, statesmen and soldiers, to create an extraordinary record.

‘A characteristically brilliant, monumental work that masterfully presents the political, cultural, military and social factors that produced the most divisive and disastrous conflict in American history. Hastings synthesizes innumerable sources, including many from North Vietnam, that, in an unflinching, clear-eyed manner capture the brutality of both sides in this war, as well as the heroism and ineptitude, the public confidence and inner doubts that resulted in the tragedy that was Vietnam – a war that Hastings implies neither side deserved to win’
General David Petraeus

‘I believe the book will become the “bible” for anyone who wants to understand the war’
General Walt Boomer, US Marine Vietnam Veteran

‘Max Hastings has done it again. This book is a tour de force, a deft, engrossing, and admirably fair-minded chronicle of the three-decades-long struggle for Vietnam. It’s narrative history at its very finest.’
Fredrik Logevall, Harvard University, Pulitzer Prize-winning author of Embers of War: The Fall of an Empire and the Making of America’s Vietnam

This year Max will be talking about his book VIETNAM An Epic Tragedy 1945-1975 at the following venues:  Read More

Book of the Year

Vietnam has been chosen by a number of newspapers, historians and reviewers as their book of the year. Read More

'Magnificent and moving ... Although Hastings deals with the high politics brilliantly, it is his account of the war on the ground that lifts this book above its competitors Read More

The Vietnam War: Deserters and dissidents

In his new book, Max Hastings recalls the brutal warfare he witnessed during the Vietnam War. In this extract, he recounts the resistance to it in America. Read More

As a young journalist, Max Hastings reported on the Vietnam War. In an exclusive extract from his new book, he recounts the reality of life for the soldiers. Read More

Max Hastings was 24 and had never been to war. All that changed when he flew into battle-scarred Vietnam and witnessed the horror – and hedonism – of a war zone. Almost 50 years on, he’s written a book about the most controversial conflict of the 20th century and returns to the country to talk to survivors. Read More

Ahead of the release of his new book, VIETNAM, Max Hastings introduces some clips of his reporting from the war. Read More

A Message to My Readers

Well, everybody: Vietnam is done, finished, over.   Now, I am just crossing my fingers that when you all get to see it in the autumn, you find the story as fascinating as I do. Read More

NEW BOOK COMING SEPTEMBER 2018 Vietnam became the Western world’s most divisive conflict since the Second World War, first creating a humiliation for France in 1954, then a vastly greater one for the United States in 1975. Read More

Vietnam became the Western world’s most divisive modern conflict, precipitating a battlefield humiliation for France in 1954, then a vastly greater one for the United States in 1975. Max Hastings has spent the past three years interviewing scores of participants on both sides, as well as researching a multitude of American and Vietnamese documents and memoirs, to create an epic narrative of an epic struggle.
Buy Now Read more