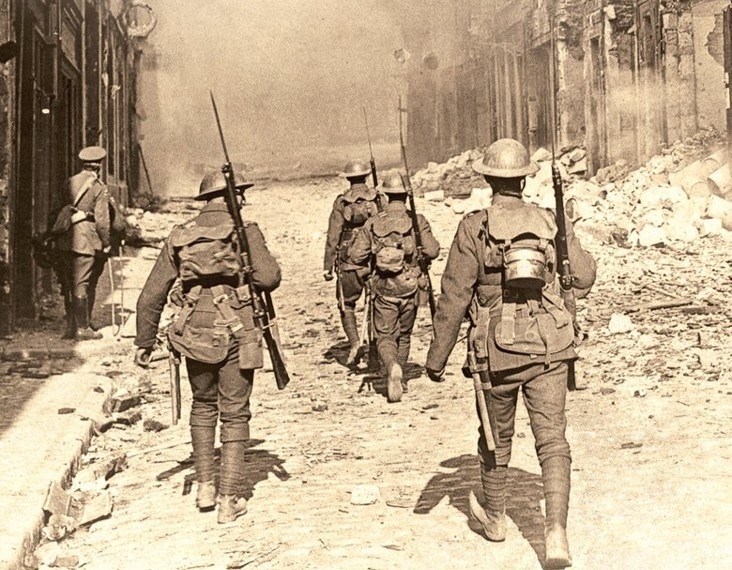 Max reviews ‘The Last Battle: Endgame on the Western Front, 1918’ by Peter Hart

The Last Battle: Endgame on the Western Front, 1918 by Peter Hart (Profile)

It is an oddity of attitudes to the First World War that millions of people display a passionate interest in 1914, the Somme, Gallipoli, Passchendaele — the notorious bloodbaths and disasters — and almost none in the overwhelming victory achieved by the allied armies in 1918.

The Nazis later established a myth, that Germany was never beaten militarily, that her soldiers suffered a “stab in the back” on the home front, by treacherous communists, socialists and, of course, Jews. In reality, however, as Peter Hart asserts in this excellent account of the last months: “One underlying truth… must be driven home: the war finished with the collective armies of France, Britain, America and Belgium achieving total domination over the German Army on the Western Front.”

It represented a remarkable reversal of fortune since, only a few months earlier, in March 1918, the Kaiser’s armies had given the allies the fright of their lives: they staged a blitzkrieg (though the word had not yet been invented) that drove deep into the British front, exploiting reinforcements transferred from the Eastern Front after the Russians quit the war.

As spring gave way to summer, however, it became apparent that the Germans had exhausted themselves. The British and French did what they should have done back in 1914, appointing a joint supreme commander, Ferdinand Foch, who proved an impressive warlord. In July, after repelling the last German push in what became known as the Second Battle of the Marne, the allies prepared to strike back.

The British prime minister Lloyd George and his acquiescent army chief, Henry Wilson, were fearful of the very word “offensive”, which implied a reprise of the ghastly casualties of the previous four years. Wilson wrote to Douglas Haig, commander in chief in France, warning against losses. This caused Haig to return a disgusted sneer at his political masters: “What a wretched lot! And how well they mean to support me!”

In the event, however, the allies were amazed by how readily the Germans crumbled in the face of a succession of unprecedentedly skilful allied thrusts. The author, oral historian at the Imperial War Museum, presents vivid testimony from all the armies. Men kept dying, to be sure, but at last it was not in vain: relentlessly, the Germans were driven back.

The green American divisions, raised from a tiny regular army of just 25,000, nonetheless suffered terribly for their inexperience and overconfidence in their first big attacks at Saint-Mihiel and in the Argonne Forest in September. Colonel George Patton was so disgusted by the spectacle of some men fleeing in terror that he claimed to have whacked one to death with a shovel.

A pitying British officer wrote of the new allies: “They had no shadow of an idea what war was like. As for our men: they had struggled and lived in everlasting mud; they had been gassed, blown up and wounded; the war had been going on since the beginning of time … The Americans couldn’t understand this utter weariness … and the two sides never got on together.”

And yet the British kept gaining ground, the Germans losing it. Hart’s narrative, beyond offering powerful eyewitness anecdotes, explains why Haig’s army of 1918 proved much more successful than in earlier years. First, the relatively elderly, frankly stupid senior officers had been replaced by younger, brighter men. The much-derided planning staffs had become highly professional. The summer and autumn attacks profited from new techniques of pinpointing and suppressing German artillery through sound ranging and flash spotting. British infantry advanced behind precisely plotted “creeping barrages” from their own guns. Although tanks broke down constantly and almost asphyxiated the crews, they crushed barbed wire with efficiency, and Haig deployed more than 400 of them.

Many people today forget what 6m people in Belgium and eastern France had suffered under German occupation since 1914. A soldier described a scene in one liberated village: “It’s a shame to see these Belgium people, some with their homes wrecked … We were billeted in one place where all the town had collected in a cellar of a brasserie. It is another life to them to see a Tommy — the kiddies clambered round, old men wished to shake hands. Also the women, if we had let the mademoiselles, they would have kissed us, and it was terrible when Fritz put over some shells — they would all go on their knees and pray, some crying, others screaming.”

So inured to failure had allied leaders become that even after the early advances, Wilson and Winston Churchill dared to hope for no more than possible victory in 1919. On October 4, Private Ernest Jackson deserted from his Royal Fusiliers battalion for a second time, after serving an earlier sentence for the same crime. After being arrested, he was shot by a firing squad at 6.10am on November 7, just missing being the last British soldier executed in the war, a tragic distinction that fell to Private Louis Harris, whose colonel had dismissed his fighting value as “nil”. Harris was shot at 6.29am.

Captain Eric Bird wrote later: “A clear vision of the future suddenly came to me. I said, ‘Do you realise that we shall probably live to be old men!’ The enormous change in our outlook, expressed by these words, may not be apparent to the present generation.”

Hart demands credit that Field Marshal Haig is often denied for a great military achievement. Some of us find this hard to concede, when so much bloodletting and callous stupidity had gone before. In November this year, we shall commemorate rather than celebrate the centenary of victory. But this book pays just tribute to the allied military achievement of 1918, too often forgotten in our preoccupation with earlier horrors.

The British people must accept that coronavirus is not going away any time soon and we shall just have to work with it. Read More
We use cookies to personalise content and ads, to provide social media features and to analyse our traffic. We also share information about your use of our site with our social media, advertising and analytics partners. Read More
Cookie settingsACCEPT REJECT
Manage consent