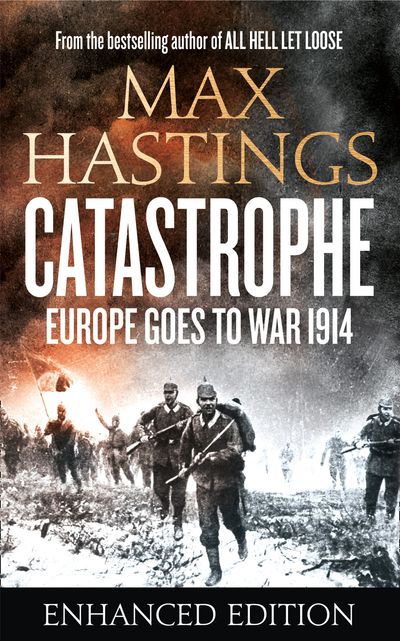 The special interactive edition of Max Hastings’ magisterial chronicle of Europe’s calamity in 1914: including interactive maps, timelines and video. Move from map to text at any point to explore the position of armies. Search the interactive timeline for the ultimate overview of the beginning of World War I. Hear an exclusive author interview.

Author: Max Hastings
Format: ebook
Release Date: 12 Sep 2013
Pages: None
ISBN: 978-0-00-754631-2
Detailed Edition: Enhanced edition
Max Hastings is the author of twenty-six books, most about conflict, and between 1986 and 2002 served as editor-in-chief of the Daily Telegraph, then editor of the Evening Standard. He has won many prizes both for journalism and his books, of which the most recent are All Hell Let Loose, Catastrophe and The Secret War, best-sellers translated around the world. He is a fellow of the Royal Society of Literature, an Honorary Fellow of King’s College, London and was knighted in 2002. He has two grown-up children, Charlotte and Harry, and lives with his wife Penny in West Berkshire, where they garden enthusiastically.

”'Like one of Field Marshal Haig’s family whiskies, Max Hastings is a dram that steadily improves with age … His position as Britain’s leading military historian is now unassailable … In this enormously impressive new book, Hastings effortlessly masters the complex lead-up to and opening weeks of the First World War … [He] is as magisterial as we would expect … This is a magnificent and deeply moving book, and with Max Hastings as our guide we are in the hands of a master” - Nigel Jones, Telegraph

”'Masterly … Hastings is a brilliant guide to that strange, febrile twilight before Europe plunged into darkness. Writing in pungent prose suffused with irony and underpinned by a strong sense of moral outrage … this is history-writing at its best, scholarly and fluent … for anyone wanting to understand how that ghastly, much-misunderstood conflict came about, there could be no better place to start than this fine book” - The Times

”'Vivid and compelling … superbly detailed and nuanced … Hastings is a master of the pen portrait and the quirky fact … yet his greatness as a historian - never shown to better effect than in this excellent book - lies in his willingness to challenge entrenched opinion” - Saul David, Evening Standard