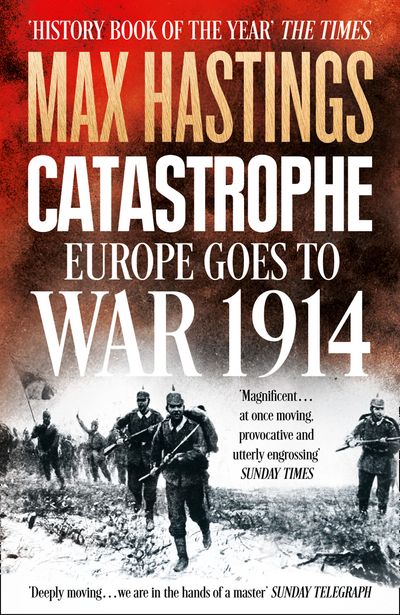 In 1914, Europe plunged into the 20th century’s first terrible act of self-immolation – what was then called The Great War. On the eve of its centenary, Max Hastings seeks to explain both how the conflict came about and what befell millions of men and women during the first months of strife.

His narrative of the early battles will astonish those whose images of the war are simply of mud, wire, trenches and steel helmets. Hastings describes how the French Army marched into action amid virgin rural landscapes, in uniforms of red and blue, led by mounted officers, with flags flying and bands playing. The bloodiest day of the entire Western war fell on 22 August 1914, when the French lost 27,000 dead. Four days later, at Le Cateau the British fought an extraordinary action against the oncoming Germans, one of the last of its kind in history. In October, at terrible cost they held the allied line against massive German assaults in the first battle of Ypres.The author also describes the brutal struggles in Serbia, East Prussia and Galicia, where by Christmas the Germans, Austrians, Russians and Serbs had inflicted on each other three million casualties.

This book offers answers to the huge and fascinating question ‘what happened to Europe in 1914?’, through Max Hastings’s accustomed blend of top-down and bottom-up accounts from a multitude of statesmen and generals, peasants, housewives and private soldiers of seven nations. His narrative pricks myths and offers some striking and controversial judgements. For a host of readers gripped by the author’s last international best-seller ‘All Hell Let Loose’, this will seem a worthy successor.

Author: Max Hastings
Format: Paperback
Release Date: 08/05/2014
Pages: 672
ISBN: 978-0-00-751974-3
Max Hastings is the author of twenty-six books, most about conflict, and between 1986 and 2002 served as editor-in-chief of the Daily Telegraph, then editor of the Evening Standard. He has won many prizes both for journalism and his books, of which the most recent are All Hell Let Loose, Catastrophe and The Secret War, best-sellers translated around the world. He is a fellow of the Royal Society of Literature, an Honorary Fellow of King’s College, London and was knighted in 2002. He has two grown-up children, Charlotte and Harry, and lives with his wife Penny in West Berkshire, where they garden enthusiastically.