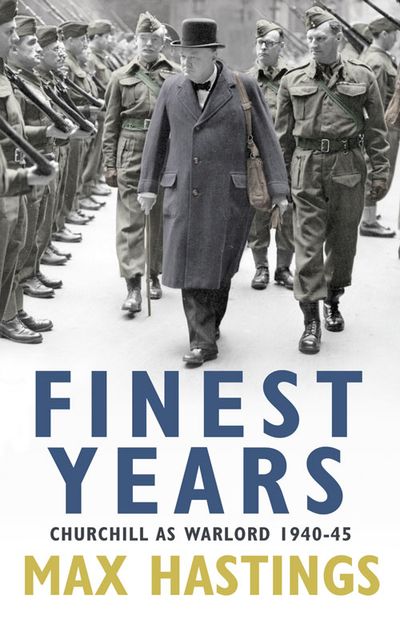 Pre-eminent military historian Max Hastings presents Winston Churchill as he has never been seen before.

Winston Churchill was the greatest war leader Britain ever had. In 1940, the nation rallied behind him in an extraordinary fashion. But thereafter, argues Max Hastings, there was a deep divide between what Churchill wanted from the British people and their army, and what they were capable of delivering. Himself a hero, he expected others to show themselves heroes also, and was often disappointed. It is little understood how low his popularity fell in 1942, amid an unbroken succession of battlefield defeats. Some of his closest colleagues joined a clamour for him to abandon his role directing the war machine. Hastings paints a wonderfully vivid image of the Prime Minister in triumph and tragedy. He describes the ‘second Dunkirk’ in 1940, when Churchill’s impulsiveness threatened to lose Britain almost as many troops in north-west France as had been saved from the beaches; his wooing of the Americans, and struggles with the Russians. British wartime unity was increasingly tarnished by workers’ unrest, with many strikes in mines and key industries.

By looking at Churchill from the outside in, through the eyes of British soldiers, civilians and newspapers, and also those of Russians and Americans, Hastings provides new perspectives on the greatest Englishman. He condemns as folly Churchill’s attempt to promote mass uprisings in occupied Europe, and details ‘Unthinkable’, his amazing 1945 plan for an Allied offensive against the Russians to liberate Poland. Here is an intimate and affectionate portrait of Churchill as Britain’s saviour, but also an unsparing examination of the wartime nation which he led and the performance of its armed forces.

Author: Max Hastings
Format: Hardback
Release Date: 03 Sep 2009
Pages: 664
ISBN: 978-0-00-726367-7
Max Hastings is the author of twenty-six books, most about conflict, and between 1986 and 2002 served as editor-in-chief of the Daily Telegraph, then editor of the Evening Standard. He has won many prizes both for journalism and his books, of which the most recent are All Hell Let Loose, Catastrophe and The Secret War, best-sellers translated around the world. He is a fellow of the Royal Society of Literature, an Honorary Fellow of King’s College, London and was knighted in 2002. He has two grown-up children, Charlotte and Harry, and lives with his wife Penny in West Berkshire, where they garden enthusiastically.

'I would choose this account over and above the rest. It is a fabulous book: full of perceptive insight that conveys all the tragedy, triumph, humour and intense drama of Churchill's time as wartime leader; and it is incredibly moving as a result' James Holland, Literary Review -

'One of the best books ever written about Churchill…Hastings's efficient, soldierly prose marches along at a brisk pace and carries the reader with it. He has drawn on copious original sources and consulted experts familiar with them, enabling him to cast fresh light on familiar episodes….a magnificent performance' Piers Brendon, Sunday Times -

'The book's portrait of Churchill is scrupulously fair and often deeply moving….in fact Hastings excels with all his character portraits, especially with Roosevelt and Stalin. Hastings is truly a master of strategy and high command' Antony Beevor, Mail on Sunday -

'Hastings's brilliant…remarkable book…At a time when our politicians are mismanaging a foreign war, it has many invaluable lessons….a timely as well as a judicious and important book' Michael Burliegh, Sunday Telegraph -

'Brilliantly executed…this is a superb book, majestic in scope and depth, studded with insights and judgments that brilliantly illuminate great and terrible events' Evening Standard -

'This is a rich and rewarding book, the fruit of many years of reflection on the conduct of the war. It is enlivened by countless insights on matters great and small, and by a spare, tenchant style which holds the reader's attention throughout its 600 pages' The Spectator -

'A vivid, moving, warts and all picture of a leader who was determined to be a hero' David Cannadine, TLS, Books of the Year -