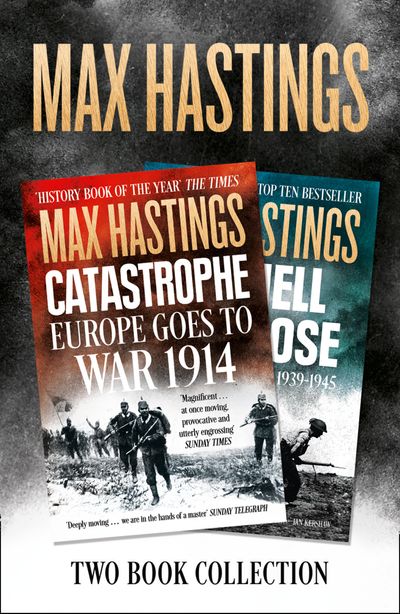 A two-book collection of Max Hastings’ bestselling works about the 20th century’s most terrible global conflicts.

‘Catastrophe: Europe Goes to War 1914’: In this centenary year, Hastings’ thrilling and also deeply moving account seeks to explain both how Europe plunged into what was then called ‘The Great War’, what befell the millions of people of many nations caught up in the first months on the battlefield and as civilian victims.

‘All Hell Let Loose: The World at War 1939-1945’: This is ‘everyman’s story’ of 1939-45 from a host of viewpoints across the world- British fighter pilots and Russians tanker crew, Chinese peasants and French housewives, American naval gunners and Italian partisans. Here, with an extraordinary blend of top-down and bottom-up testimony is Hastings’s acclaimed answer to the question ‘what was World War II like?’

Author: Max Hastings
Format: eBook
Release Date: 08/05/2014
ISBN: 978-0-00-758537-3
Max Hastings is the author of twenty-six books, most about conflict, and between 1986 and 2002 served as editor-in-chief of the Daily Telegraph, then editor of the Evening Standard. He has won many prizes both for journalism and his books, of which the most recent are All Hell Let Loose, Catastrophe and The Secret War, best-sellers translated around the world. He is a fellow of the Royal Society of Literature, an Honorary Fellow of King’s College, London and was knighted in 2002. He has two grown-up children, Charlotte and Harry, and lives with his wife Penny in West Berkshire, where they garden enthusiastically.

A two-book collection of Max Hastings’ bestselling works about the 20th century’s most terrible global conflicts.